Weather and Climate in Vale do Lobo

When the British summer is being its usual unpredictable self, there may be times when you long for the certainty of blue skies and warm sunshine.

If you want a little bit of luxury sprinkled in too, then why not consider taking a trip to Vale do Lobo for your next holiday?.

The weather and climate in Vale do Lobo is perfect for lazing on the beach, or enjoying a round or two on some of the immaculate golfing greens in the area. Here's a guide to the kind of temperatures and weather you can expect while you're there. 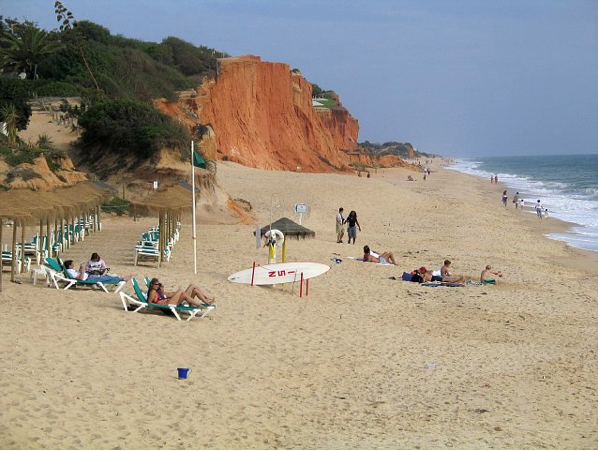 Vale do Lobo lies in a pine valley on the Algarve coast in Portugal, an area renowned for its top class facilities and year round sunshine.

Sheltered by the Monchique mountain range slightly inland, Vale du Lobo is protected from the worst of any bad weather.

It's a coastal location, lying right on the beach, so in the summer a fresh, gentle breeze can help take some of the intensity out of the heat.

The waves which lap against the white sandy shores of Vale do Lobo come from the Atlantic Ocean. During June to September, the waters are wonderfully warm, rising to 23 degrees Celsius. This is the best time to enjoy watersports such as kite surfing, waterskiing or even scuba diving. The sea can be slightly cooler outside these peak months but is still clear and calm for those who don't mind a slight chill when they first dip a toe in!

The whole area is known for its temperate year-round climate, with barely any rain expected during the summer months, and no freezing temperatures even in the depths of winter.

The four seasons in Vale do Lobo

Vale do Lobo is a location which is great to visit in every season. The middle of winter may not bring the sizzling heat of the summer, but you're likely to enjoy blue skies and mild temperatures - a welcome break from the freezing cold and grey skies back home!

Here's a guide to the typical weather you may experience during each season in Vale do Lobo.

Spring in Vale do Lobo is typically Mediterranean, with temperatures starting to rise and heating up as summer approaches. Spring is generally considered to run from March through to the start of summer in June.

The average temperature ranges between 19-25˚C, with nights slightly cooler at around 16˚C. Humidity typically stands at around 70-75%.

Spring is also the wettest season, like many Mediterranean countries, and there's a reasonable chance you might encounter a shower or two during your stay. It rains for around 7-8 days every month but unlike in the UK, it doesn't come with cold temperatures and is unlikely to last too long.

The most glorious season in Vale do Lobo, summer is typically said to run from June until August, although some consider that it starts in late May.

A beautiful sunny day in Vale do Lobo

The season is hot and arid, with little rain or inclement weather; you are more or less guaranteed beautiful sunshine and blue skies. For this reason it's often known as 'the dry season'. Expect temperatures to range between 25-28˚C and it can climb higher on some days. Nights are generally still quite a bit cooler, dropping to around 17˚C. Humidity stands at 60-65%.

There's 12 hours of sunshine, with the days being long and full of light, providing perfect conditions for activities from morning right through to the evening.

As autumn starts to unravel, the temperatures being to cool, dropping to around 15-22˚C. You would rarely expect it to be any lower than this. Nights however can feel distinctly chilly, with the temperature dropping to 11˚C once the sun has set for the day.

The amount of daylight starts to shorten too, falling to around 9 hours at the beginning of autumn and dropping further to roughly 7 hours as winter starts to arrive.

Although the heat of the summer sun may have passed for another year, the weather is still mild and the climate temperate. Expect to enjoy temperatures in the region of 12-15˚C.

There's around five hours of sunlight each day and the chance of rainfall is similar to the spring, with up to 10 days every month experience some precipitation.

A beautiful location whatever the season

Vale do Lobo doesn't suffer from weather extremes in either direction; the temperature never drops below freezing and there's no freaks of nature. This makes it an extremely predictable and temperate spot to visit.

While there's no denying that the warmth of the summer is difficult to resist, Vale do Lobo has so many other attractions, indoors and out, that a trip there at any time of the year is likely to be a huge success.