Tennis holidays in Vale do Lobo

Vale do Lobo is renowned internationally as a luxury golf resort, with award-winning courses for guests to enjoy.

And there's certainly no denying that the quality of the fairways and greens is simply sublime, with those who enjoy a round privileged to experience both incredible golf architecture and sublime views.

Vale do Lobo is home to many sports, with scuba diving and water sports particularly in demand. However, on dry land, there is another sport which rivals golf in its intensity and quality: tennis.

The whole of Vale do Lobo is home to some of the best tennis facilities that can be found anywhere, making it the perfect destination for rising stars, amateurs or simply tennis enthusiasts keen to have a game.

We take a closer look at tennis holidays in Vale do Lobo and what to expect.

With exclusive villas and resorts complemented by luxurious facilities, there's no need to queue at crowded leisure centres to hire a court for a game or two.

Vale do Lobo has some of the best tennis facilities available but what's even better, rather than having to battle grey skies and rainy downpours, the climate in Portugal is beautiful all year round. With blue skies, warm temperatures and hardly any rain, tennis training and coaching is a pleasure. 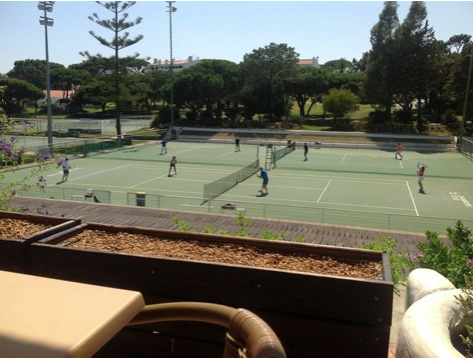 Tennis at Vale do Lobo

Vale do Lobo is lucky enough to have a year-round mild climate which means that no matter what the season, there's no difficulty in getting out too play. In fact, without the heat of the summer months, some of the best training is done during off-peak season.

To say that the tennis facilities in Vale do Lobo are championship quality is an understatement; with state of the art equipment and all abilities catered for, there's no better place to go to improve your game.

Vale do Lobo Tennis Academy is a world-class facility and one which keen tennis players, both child and adult, flock to from all over the globe.

There are a total of 14 tennis courts, four of which are synthetic grass and the other 10 hard court. Six of the courts are floodlit so can still be played on after the sun sets for the day, for those die-hard enthusiasts.

There's also a paddle tennis court and a court specifically set up to match children's dimensions.

Paddle tennis is a variant of the game which doesn't require a stringed racket. A wooden or plastic bat is used instead, together with a sponge rubber ball and the court is slightly smaller with no double lines. The rules are similar but with added variants - such as allowing the ball to bounce off walls, creating a kind of hybrid between tennis and squash. The game is renowned for being particularly quick and improving reflexes, thought to help those who need to up their performance at the net in regular tennis.

Aside from the courts, there's a range of other facilities too, as you might expect from such a top class, championship centre.

Of course, the Tennis Academy isn't just a place for those who enjoy the game, it's designed for players who want to improve and get better.

There's a team of elite coaches in place, with indisputable credentials. Leading them is Pedro Frazão, previously one of the top players in Portugal and is now widely recognised as one of the world's best coaches, holding number one position in Portugal itself. Currently a director of the European Professional Tennis Association, Pedro Frazão also holds both American and European coaching certificates.

Pedro Frazão and his coaches run a programme of courses throughout the year, as well as offering individual lessons too, together with tournaments and social events for those visiting Vale do Lobo to enjoy.

The facilities at Vale do Lobo Tennis academy are such excellent quality, the centre is the venue for a number of high profile events throughout the tennis calendar, bringing stars from all over the world.

The Vale do Lobo Grand Champions Caixa Geral de Depósitos, the Portuguese Ladies Open and an ATP Senior Tour competition are all played in Vale do Lobo every year. 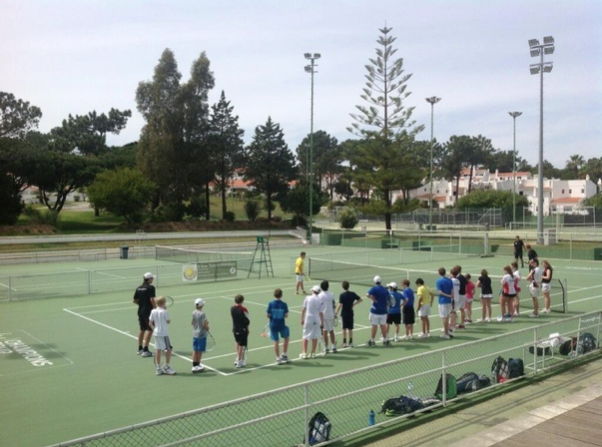 A tennis competition in Vale do Lobo

This latter competition is one of the real special occasions, drawing tennis fans from everywhere to the event. Past winners have included Bjorn Borg, John McEnroe, Jim Courier, Michael Stich and Jeremy Bates. Among their opponents have been fellow international stars such as Henri Leconte, Yannick Noah and Richard Krajicek. A glittering all-star occasion guaranteed to provide not just top class tennis but plenty of entertainment too.

Vale do Lobo is a resort famous for its luxury, the perfect place to focus on improving your game. Make your next holiday a trip to the Algarve and enjoy some of the gourmet restaurants, while taking in a game or two of tennis under the careful eye of some of the world's premier instructors?