Scuba diving in Vale do Lobo

With beautiful warm sunshine and the clear, gentle sea, Vale do Lobo is the perfect holiday destination all year round.

With more than 3000 hours of sunshine every year, stunning landscapes and luxury facilities, Vale do Lobo is a popular location.

Situated in a private pine valley, Vale do Lobo has its own immaculate white sandy beach which stretches out along the coastline for miles in either direction. If you've ever wanted to learn to dive, you could pick a more picturesque location.

The Atlantic Ocean which laps at the shore is a fascinating world full of breathtaking marine life just waiting to be discovered. Whether you are a completed novice or an experienced scuba diver, the waters around Vale do Lobo are a great spot to explore.

Diving in the clean Algarve waters is fun for everybody

If you enjoy snorkeling in the ocean, peering at the fish and creatures below the surface, you won't fail to fall in love with scuba diving. The chance to enter an underwater world, scuba diving is suitable for nearly everyone and it's easy to get started.

Even children can learn to scuba dive; many schools suggest a minimum age of 10 years old.

Before you can get out into the ocean, it's essential to learn the basics first. There are many dive schools along the coastline near Vale do Lobo so you can take your pick. The instructors will first take you to their pool where you'll learn how the techniques you'll need, and how to use the equipment. This stage typically takes a morning.

After this, if the instructor is happy with the progress you've made, you'll be taken out to the ocean on your first dive. 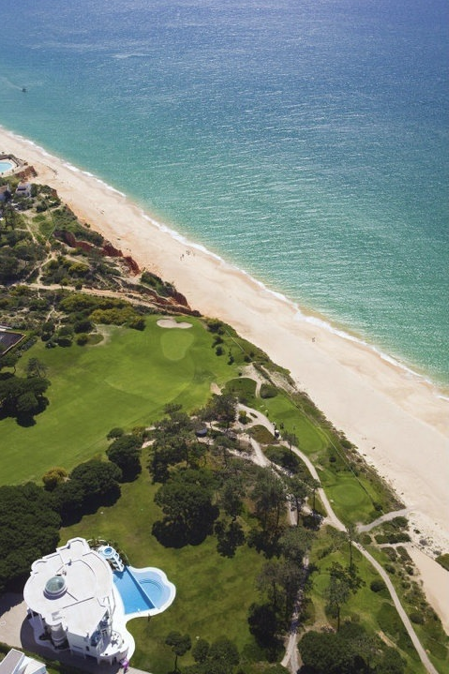 PADI - the Professional Association of Diving Instructors - is one of the world's top scuba diving training organisations and it's a good idea to look for a school who offers this accreditation. There's a range of diving courses you can attend, increasing in complexity, which cover everything from stepping into the water for the first time to wreck diving and night diving and other specialities.

What you can expect in the water

The Atlantic Ocean borders Vale do Lobo and is home to an incredible array of creatures, even in the more shallow areas.

However, the Atlantic is not as warm as the Mediterranean so to enjoy the waters at their best, plan to dive between June and September. During these months the temperature of the sea reaches a tropical 24°C. During the rest of the year, the waters range between 16°C - 18°C.

It's entirely possible to dive all year round but the conditions may be slightly colder; a thicker wetsuit might help with this but normally 7mm is sufficient.

Visibility in this part of the Atlantic is normally good; expect to be able to see 8 metres as an average, but potentially as far as 15-20 metres on a clear day. When the weather is more turbulent or the waters less settled, visibility can drop to much less.

Reef and wall dives are the main locations along the coastline although there are also a few wrecks and some simple cave formations for more experienced divers to explore.

What you will see in the waters depends on how deep you are diving, and also the type of location you are exploring. Some types of marine life are much shyer than others!

Here's an overview of some of the dive sites you might visit in and around the waters off Vale do Lobo.

An artificial reef lying at a depth of 18 metres, The Blocks is a series of one metre square 'blocks' with holes punched through them. These circular holes provide the perfect hiding place for marine life and you can expect to find some huge specimens of sea bream and other fish as they shelter from fishermen.

A reef dive lying 13-19 metres below the surface, this is a site which is great for beginners. Three large rocks up to 5 metres in height lie at the site, being surrounded by smaller rocks and walls. These formations create lots of holes and hiding places and you can expect to find octopus, spider crabs and baby conger.

A dive site for the more experienced, Torvor is situated between 27-32 metres deep and features an old steamship wreck. Visibility is typically 10-15 metres.

Torvor was sunk during WWI by a German submarine in 1917, being a steamship loaded with coal. 80 metres in length, there's a myriad of marine life including conger eels which weave in and out of the wreck.

There's lots of watersports in Vale do Lobo but only scuba diving allows you to become part of the world below the surface, if only for a little while.

The Atlantic is home to some incredible species and exploring the clear, warm waters will guarantee a truly magical experience.