Golf in Vale do Lobo

The luxury resort of Vale do Lobo is known for its wonderful climate, sumptuous villas and apartments and the wealth of activities on offer in and around the resort.
And with gourmet restaurants, a seafront location and beautiful landscape, Vale do Lobo really does make the perfect holiday getaway for families, couples and singletons.
However, it is particularly famous for one particular sport, one which the resort was originally created around: golf.
We take a closer look at golf in Vale do Lobo and where you can play.
Overview
The resort was originally created in 1962 and at that time, a luxury hotel and a golf course designed and created by famous golfer Sir Henry Cotton were at the centre of the development. 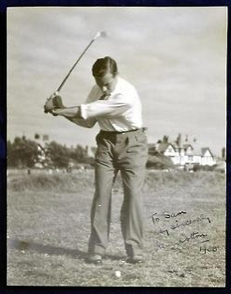 Henry Cotton, the original Architect of Vale do Lobo golf course playing golf
Image Source
The plan was to create a luxury development on the Algarve coast that would provide sumptuous accommodation plus top level golf.
Fast forward fifty years and much has changed.
The resort of Vale do Lobo is now the largest single owned luxury development in the whole of Portugal. The golf course which started off fairly modestly has now been transformed into two full size courses which have received international acclaim.
Thirteen of the holes from the Royal course were combined with five from the Ocean course to create the layout for the Portuguese Open in 2003.
Vale do Lobo Royal
The first golf course to be created, the original layout has since been split into two halves to create the courses now known as the Royal and the Ocean.
The Royal is widely regarded as the superior of the two, with an additional nine holes added in the 1990s by renowned golfing architect Rocky Roquemore. As the ground moves inland, there's gentle undulating designed to test the golfer's skill without being overtly challenging to the eye.
With many of the holes being used as the layout for the Open in 2003, it is perhaps not surprising to discover that they are testing in the extreme, yet very playable. 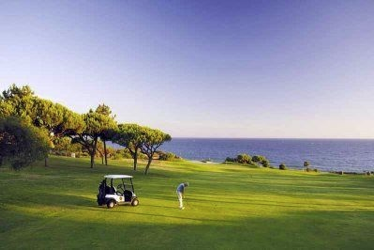 A view from the Vale do lobo Royal golf course
Image Source
At 6175 metres, the course is championship length and is set in an outstanding natural setting. Pine trees encircle the holes with wild flowers dotted along the way, creating a rather wonderful effect.
Adding to the overall visual appeal is the number of lakes, with their clear blue waters contrasting with the lush green fairways. However, it's these lakes, along with the large bunkers which make the course quite as troublesome as it is.
The Royal tends towards longer holes, with more obstacles and fairways and greens that stretch the skills of even the most experienced golfer.
What used to be the 7th hole on the previous layout is now the 16th hole on this new set up and is widely held to be the most outstanding hole on the course. Measuring 224 yards from the back tee, its cliff top locations are breathtaking and features regularly in Portuguese golf photography. Easily considered to be the signature hole of the course.
The 18th hole doesn't provide an easy finish either, with a narrow fairway which requires the ball to be squeezed through, and a green which is deceptively tricky. On this hole accuracy is more important than driving a great distance and after sinking your putt; it's time to adjourn to the 19th hole for a relaxing drink or bite to eat in the restaurant.
Vale do Lobo Ocean Course
Running alongside a nature reserve before heading off towards the Atlantic, the Ocean Course is very aptly named.
The course is 6137 metres long, with a par of 73, created partly from the original course which primarily contributed towards the Royal layout.
With the first nine on rather hilly land, and in a similar fashion to some places on the Royal Course, the Ocean course is surrounded by the Algarve pine trees for which the resort of Vale do Lobo is known. 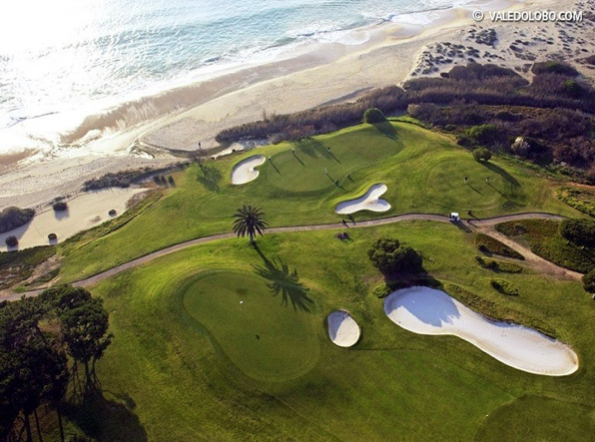 The Vale do Lobo Ocean golf course certainly lives up to its name
Image Source
But it's on the back nine that the course really jumps to life with spectacular views of the ocean and some of the holes nearly reaching the beach.
While Royal course demands true and straight drives, the Ocean Course is slightly different, better suiting the golfer who is able to create a better shape to their shot.
The 11th hole in particular offers wonderful views, with golfers unexpectedly arriving on the brow of a hill to a beautiful panorama. The hole is extremely challenging with a blind tee shot but aiming over the left hand side of the fairway bunker will prove fruitful. Even if you don't play your best golf on this extremely difficult hole, you won't be able to help but admire the views.
As the fairway meanders towards the beach, there's unspoilt ocean views - but don't forget to factor in that all-important ocean breeze!
The 14th is another emblematic hole for this course, with the pin lying in an elevated position. To have any chance of landing on the green with the second shot, you'll need to aim towards the left. Using a high iron you should then be able to gently roll onto the green. Alternatively, a wood shot or a low iron will give you enough guts to bump through the front of the green first.
The 15th hole, with its par 3 is another worthy of mention as it runs alongside the beach, providing golfers with gorgeous views and the taste of fresh sea salt on their lips.
The course finishes with a flourish, placing the ball onto an elevated green. However, with a bunker, a narrow fairway and an unusual cadence to the fairway, reaching the 18th can be much harder than it looks.
The Ocean course is often considered to be the junior of the two, but it's worth pointing out that it's still a sensational course. The middle holes provide the opportunity for the golfer to open up their shoulders and relax through the shots. 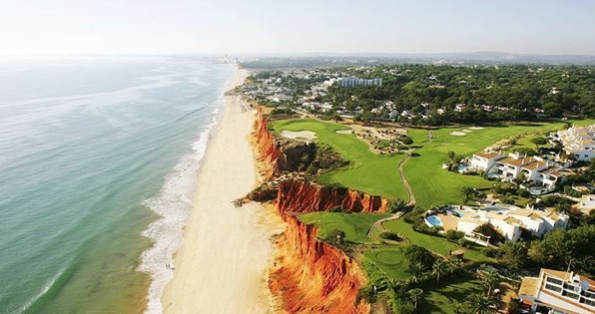 A spectacular aerial view of the Ocean golf course at Vale do Lobo
Image Source
What's particularly unusual about the course is its proximity to the ocean; it runs closer to the sea than any other course in the whole of the Algarve. It's from this that the course takes its name even though the holes flanked by eucalyptus and pine trees are equally picturesque.
The Ocean course certainly provides its challenges and should be considered by no means easy, but by comparison to the Royal, it is more forgiving. This means that for novices or less experienced golfers, it's the better choice of the two.
Golf in the Algarve
The Algarve region is particularly renowned for its golf, and there's a large number of clubs and courses in the area where both members and visitors can play.
However, it's worth remembering that the whole resort was originally created to be a luxury golfing development, so the game is at its very core. Away from the course, you'll find boutique shops catering for sporting and golf buys, so you can really immerse yourself in the whole experience.
And of course, if you're a big golfing fan, but the rest of the family isn't so keen, there's many other things to do in Vale do Lobo. So while you're having the time of your life on the fairways, your family can enjoy the other attractions and activities in the area, giving everyone the holiday they really want.