Visitors to Quinta do Lago and the surrounding areas will be treated to spectacular views of Ria Formosa from many of the vantage points around the coast. However you won't be able to fully appreciate everything the nature reserve has to offer unless you get down to the edge of reserve and take a walk around. 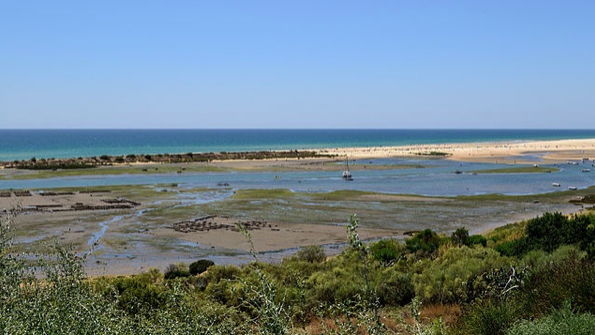 The Ria Formosa was handed the formal title of national park in 1987 and has been voted as one of the Seven Natural Wonders of Portugal.

The reserve is a vast expanse, covering 18,000 hectares which incorporates two peninsulas and five barrier islands which provide protection for the reserve from the ocean. 18 hectares of the Ria Formosa fall within Quinta do Lago and have helped shape the character of the many world class golf courses found there.

As a coastal lagoon, the Ria Formosa offers a changing landscape with the winds, tides and currents all continuously impacting on the reserve and the flora and fauna which can be found there.  However, it isn't just lagoons and water; Ria Formosa also boasts a large pine woodland area, and it is this which borders onto the famous Quinta do Lago golf course. 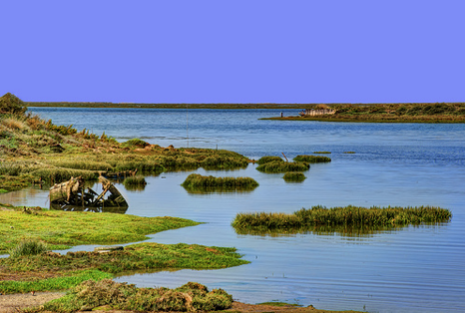 A beautiful coastal view of the Ria Formosa Nature Park

Although the scenery is nothing short of breath-taking, the reserve plays a very important role in the eco system and the preservation of wild life in the area.  Endangered species such as the seahorse find a place to thrive in Ria Formosa, helping to secure their continued presence on the planet. The chameleon is another creature which is on the red list, with southern Portugal the only place where it can be found. Ria Formosa is one of the most important habitats for the chameleon, allowing the species to thrive.

Other animals which rely on the reserve include the otter and the European Pond Turtle, an animal at serious risk of extinction. More than 15 different species of reptile and 11 different amphibians can be found in the Ria Formosa.

Although the lagoon is protected from the sea, it is a tidal expanse of water and this helps it play an important role in the eco system. Many ocean creatures start their life in the lagoon, treating it as a type of nursery whilst they grow big enough to cope with the demands of the open sea. Shellfish such as clams are particularly common in the pools of lagoon water, and more than 300 species of molluscs can be found in and around Ria Formosa.

However it is perhaps the birds of Ria Formosa that are the most famous, with the reserve offering a much-needed stop-off point for those on a migratory path. The reserve is considered such a vital area for both resident and migratory birds that it is part of the Natura 2000 Network and has been designated as an "Important Bird Area" (IBA).

One of the reasons why Ria do Formosa is so popular with birdlife is that there are both freshwater and saltwater areas, attracting birds and animals which thrive in the different habitats.  More than 200 species of birds are seen in the park regularly, and aquatic birds and waders rely on the habitat. Ducks are a common sight; expect to see Shovelers, Widgeon, Teal and Pochards whilst waders such as Bar-tailed Godwits, Dunlin and Curlew are also frequently spotted.

But for sheer magnificence, there's little that can beat seeing the brightly coloured Greater Flamingos in the wild. They are present all year round but if you stay in Quinta do Lago between August and March you will be treated to the sight of huge flocks of the vivid pink birds. 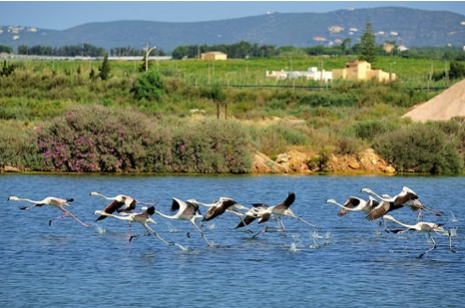 Away from the water, smaller birds such as Bluethroats might be spotted whilst in the sky above, birds of prey such as Marsh Harriers and Ospreys often circle.

You don't need to be an avid bird watcher or nature-lover to appreciate the sights that Ria Formosa has to offer.

The plant-life and stretches of spectacular scenery, including the deep blue of lagoons, are a sight to behold.  If you want to take a stroll around the reserve, it's easily accessible including for those with young families or with impaired mobility. Many of the paths are level and hard-surfaced, allowing unrestricted access for both prams and wheelchairs.

There's a trail from Quinta do Lago that circles the reserve and includes enclosed bird watching areas, complete with identification charts too.

If you want to get a better view of the salt marshes, there's a boardwalk which provides access, which again is suitable for both prams and wheelchairs too.

The site includes a large and well-stocked visitor centre too, where there are public toilets and refreshments can be purchased. A museum is also housed right next door and there's a restored tidal mill and some Roman remains for visitors to browse around.

Ria Formosa is also right next door to the world-famous golfing resort which has played host to the Portuguese Open on eight separate occasions.

The golf course and the surrounding resort have been designed specifically to complement the nature reserve, with no building taller than two storeys high. Development has deliberately been kept to a minimum, with just 8% of the land built on, in order to preserve the delicate eco-system and provide a secluded and harmonious place to escape to.

Ria Formosa is very visible from the South Course, with some of the holes providing stunning views out over the lagoon whilst the reserve's pine woodland gently nudges up against the fairways.

But you can also enjoy Ria Formosa and everything that is has to offer from elsewhere too; the resort has seven different restaurants many of which offer views over the reserve, allowing you to watch the breath-taking changes in the landscape as the sun slowly sets on another beautiful day in Quinta do Lago.