Quinta do Lago offers an array of world class attractions, from private and secluded beaches with glistening white sand, to the raw beauty of the Ria Formosa nature reserve with its fringe of pine woodland surrounding the resort.

If you want to pamper yourself, there then are spas and health suites surrounding the luxury villas and when night falls, there's an array of sumptuous restaurants to choose from as you watch the sun slowly set.

However, despite the exclusive facilities, the resort is primarily famous for just one thing: golf.

The Quinta do Lago name is inextricably bound with championship level golf and professional players from around the world continue to enjoy the fairways and greens whilst relaxing at the resort.  And looking around the courses, it's not difficult to see why. The greens are glassy smooth and the fairways are lush and green. The layout for each pin is carefully planned to challenge golfers of all abilities with every contour and curve expertly executed.

Quinta do Lago has hosted the Portuguese Open on eight occasions so if you fancy pitting your wits against the same fairways that tested the professionals, book a round or two at one of the courses the resort has to offer.

One of the original golf courses at Quinta do Lago, the course began to be designed in 1974 when nine holes were opened.

The popularity of the circuit led to a further nine holes being created in 1989 by a different golfing architect. The result is a captivating course which makes the most of its naturally beautiful surroundings which change with every season.

The bunkers and other hazards demand that each shot is placed with precision whilst the many dog legs scattered around the course place an extra challenge upon the golfer. A powerful player will have a definite advantage around this course but drive without accuracy and you will quickly find yourself in trouble.

Not quite as technically difficult as its sibling the South Course, the North Course may look deceptively easy but will soon have complacent players cursing as the undulating contours catch out those who don't give it the respect it deserves.

The showpiece of all the golf courses on Quinta do Lago resort, the South Course is where the Portuguese Open has been hosted no less than eight times, the last time being in 2001.

A visit to the course will quickly reveal that its reputation of being one of the best in the world is well deserved with immaculate fairways, a clever course layout and beautiful landscaping.

The South Course has the advantage of being bordered by the natural raw beauty of the Ria Formosa, one of the most important nature coastal nature reserves in Europe. Views over the Ria Formosa and the Atlantic beyond can be enjoyed from some of the holes on the course but beware those lofty tee shots; the views may be enjoyable but the breeze from up high can be tricky to master!

Despite being one of the newest golf courses at Quinta do Lago, having only opened in 2009, it was voted the Best Golf Course at the Portuguese 2011 Travel Awards.

Set deep into the Ludo Valley in surroundings which used to be an orange grove, Laranjal is a particularly scenic and picturesque location. Lying 2 kilometres east of the main Quinta do Lago resort; Laranjal offers players a par of 72 which requires them to navigate around five stunning lakes and its fringe of orange, cork and pine trees. 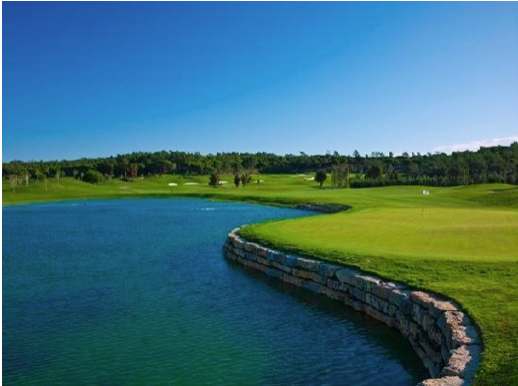 An image of the Laranjal golf course, Quinta do Lago

Laranjal is 6480 metres long, and demands concentration; any inattentive golfers will be punished by the deliberately rolling terrain.

There are five par 3 holes, eight at par 4 and a further five at a par 5 with narrow and testing fairways and fast, sharp greens.

Not one of the trio of golf courses directly linked to the owners of the Quinta do Lago estate, the San Lorenzo circuit is buried deep in the grounds but owned by the nearby Meridien Dona Filipa Hotel.

Any player can book to use the course but to get the best tee times and reservation rights you will need to be a guest at the hotel.

San Lorenzo's place on the Quinta do Lago resort is well earned, being a particularly beautiful golf course which offers its players plenty of variety. In the past, San Lorenzo has been nominated as the second best course in Europe.

There's a useful practice area just in front of the clubhouse and the course weaves its way through serene pine woodland before moving out to the scenic but rather intimidating holes dotted around the lakes.  Offering unbroken views of the deep blue Atlantic Ocean as well as a technically demanding golf course, San Lorenzo is a firm favourite amongst Quinta do Lago golfers.

For those who want that little bit extra from their golfing experience, Pinheiros Altos offers a full 27 holes of magnificence.

Set on the Quinta do Lago estate but owned privately by the Ria Formosa Hotel, the course is one of the most established on the resort.

The course is set out as three separate circuits of nine known as the Oliveiras (the Olives), the Pinheiros (the Pines) and the Sobreiros (the Corks). All three of these loops begin and end close to the luxurious clubhouse, helping golfers to enjoy a truly relaxing day.

The terrain changes subtly with each circuit; the first nine holes wind through pine trees with sandy undergrowth whilst the second set are arguably the most challenging on the course, with hilly fairways and hidden lakes waiting to catch out the careless golfer.

The back nine are particularly tranquil and the beautiful setting means that you could be lucky enough to catch a glimpse of some of the local birdlife whilst playing round the holes. However, don't be fooled by the scenic setting; the holes are just as technically demanding and the island pin on the eighth is one of the most famous on the entire course.