Tucked away at the very most southern part of the Algarve, Quinta do Lago is a luxury resort which offers world class accommodation, a wide choice of restaurants and bars and of course, the championship quality greens and fairways of the golf courses.

Golf isn't the only sport which is popular in the resort; there's also tennis, horse-riding and cycling plus there's a cutting edge fitness room, with boot camps and cycle tours as well.

But although there are plenty of activities to keep you busy in Quinta do Lago, there are also lots of places to simply wind down and relax. If you are hoping to enjoy the warm weather, relax under azure blue skies and take things easy, you might want to check out some of the beautiful beaches in the region.

Quinta do Lago lies on the Atlantic coast but the waters are much warmer than those further north. This is due to the influence from both the Mediterranean and North Africa, heating the ocean to a tropical 26°C during the summer months. And with a lack of industry in the Algarve, pollution is at a minimum, earning the area the well-deserved nickname of 'bather's paradise'.

Both Quinta do Lago and the beaches immediately surrounding it are some of the best that you will find anywhere, with a mix of both family-orientated and quieter stretches of sands too.

Here's a guide about the beaches available and how to get there.

Quinta do Lago has its own beach, offering the same seclusion, privacy and exclusive atmosphere as the rest of the resort.

Lying alongside the stunning Ria Formosa nature reserve, Quinta do Lago beach has pristine white sands which stretch out for three kilometres, protected by a line of sand dunes.

The beach is accessible only via the resort, with a small wooden bridge providing access over the tidal lagoon of the Ria Formosa.

Quinta do Lago's beach is one of the most natural parts of the coastline, offering unspoilt views of the ocean and an escape from the throngs of people. The sea is safe to swim in as the waters are calm and gentle and the beach has been awarded the EU Blue Flag because of the high standards it maintains regarding water quality, safety and environmental management.

Although the beach is a wonderfully quiet retreat, during the summer months there is a life guard stationed there.

If you are willing to travel a little further, you might want to consider visiting Praia da Marinha, a beach which lies on the other side of Albufeira, closer to the west.

Although Praia da Marinha can get busy, the beach never feels overcrowded as there is plenty of room even at high tide. When the tide is out, even more space is available including a smaller area in front of the restaurant (which is open during the peak season).

The car park is above the beach and during the winter months is a popular site for camper vans. Access to the beach is via a pretty staircase which offers spectacular views out over the ocean, with stone stacks visible as they rise out of the water.

The staircase is quite high but stable and easy to manage even on your return trip to the car.

Just like the rest of this part of the Algarve coastline, it's not a good idea to sit close to the cliffs due to the dangers of falling rocks. It's a better idea to sit closer to the water and bring a parasol to provide the shade if needed.

The sea itself is clean, gentle and ideally suited for bathers. There's also a generous sheltered area which is perfect for either snorkelers or those who aren't as confident in the water.

Moving east from Quinta do Lago and travelling to the opposite side of Faro provides the option to visit Praia do Barril, an unusual beach which is worth the 45 minute car journey.

Set on the island of Tavira, the beach is accessed via a floating walkway from the mainland. To get to the beach, there's a stroll across the island of approximately one kilometre. However, if you don't fancy lugging all your beach gear around, you can also catch a miniature train. This is a particularly great option if you have children. 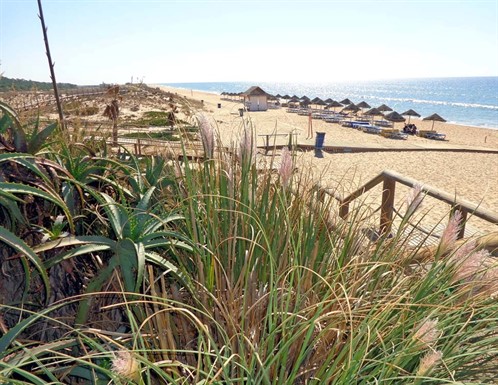 Praia do Barril, near Quinta do Lago, Algarve

Despite being away from the main part of the Algarve, Praia do Barril is a beach with plenty of facilities close at hand. As well as shops and bars, there are plenty of cafes all of which are open during the off-season too.

Tavira used to be a thriving fishing village, catching tuna, and the locals have created an anchor memorial to the old fishing ships in the sand dunes adjacent to the beach, which is an enjoyable little detour to make.

Like Quinta do Lago, the beach also has been awarded the Blue Flag and along with swimming, paddling and watersports is also a great sport to see wildlife and birds.

On the western side of the beach, there is one of the few legal naturist stretches of sand in the Algarve so avoid this area if you prefer not to be confronted by nudity.

A very short distance from Quinta do Lago lies Praia do Anção, a long sandy beach which is easily accessible off the main road. It is actually a continuation of the beach at Quinta do Lago but in order to reach it without a car means travelling down a rough track.

Another Blue Flag area, Praia do Anção is particularly good for watersports, with windsurfing and beach volleyball often taking place. A life guard is present all of the time. 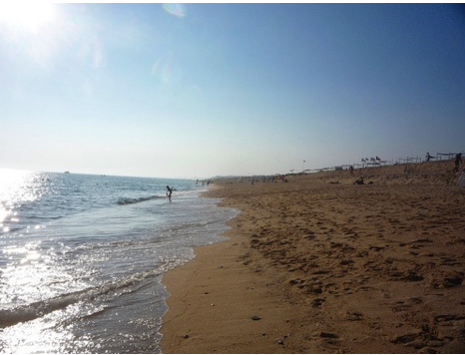 Just like Quinta do Lago, Praia do Anção lies within the Ria Formosa nature park, so the vistas are wonderful and there's an abundance of wildlife in the immediate vicinity.

This beach is very popular with families and those with younger children because it is sandy and very safe, with sunbeds and sunshades available to rent.

It's also a great place to grab a bite to eat as one of the Algarve's best fish restaurants is located near the waterfront, along with a whole host of other eateries.