Quinta do Lago – Weather and Climate

Lying in the southernmost tip of Portugal, the Algarve is famous for its long sunny days, gentle breezes and tropical climate.

Quinta do Lago lies at the very bottom of the Algarve, soaking up the best of the weather whilst also enjoying views of the ocean and the wonderful Ria de Formosa Nature Reserve.

As a luxury golf resort, it is the sublime courses which bring many visitors to Quinta do Lago, with the South Course having hosted the Portuguese Open on no less than eight occasions.  However, although the greens are immaculate and undoubtedly amongst the best in the world, the experience is enhanced by the climate that Quinta do Lago and the rest of the Algarve enjoys.

Despite being part of Portugal, the Algarve is often viewed rather differently by tourists and visitors to the country.  Being in the south of the country, the Algarve has a reputation for being the destination for more affluent holidaymakers, with budget resorts a scarcity in the region. 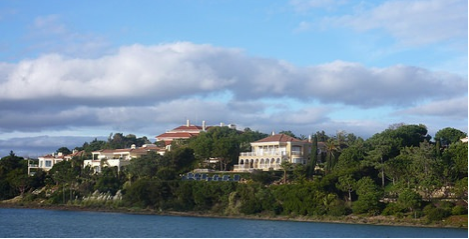 The Algarve is home to many beautiful landscapes.

One of the reasons the Algarve is so popular with the wealthy is because of the fabulous climate it provides all year round. Although much hotter during the summer months, being such a southerly region, the Algarve enjoys a temperate climate even in the depths of winter.

Winter is generally assumed to be between December and February and the temperature rarely drops below 0ºC.  The normal winter-time temperature is typically around 16ºC although the nights are slightly chillier, dropping to 13ºC.  You can expect rainfall but usually just short showers rather than persistent downpours.

But even when the overall temperature is only lingering around 16ºC, it can often feel quite warmer in the sunshine. Temperatures out of the breeze and in the sun can still be as high as  21-22ºC, often allowing T-shirts to be comfortably worn even in the middle of winter. It's a good idea to take a mix of clothing if you are travelling to the Algarve between October and March; you may need longer sleeves or a light jacket or you could be enjoying warmer weather and sitting on the beach even in January!

If you don't like the hottest weathers, spring and autumn are wonderful times to visit the Algarve as the temperatures are much warmer without being excessively hot. It's still hot enough to hit the beach and even in the shade the temperature could reach the mid-20s.

Be aware though that even if the days are warm during autumn and spring, the nights can still be rather cool and the ocean won't be as warm either.  You may experience light rainfall during spring and autumn but the showers will be very short-lived and can feel refreshing rather than cold. The other advantage of the rain can be the appearance of the wild flowers in the spring, a beautiful sight which heralds the scent of summer. 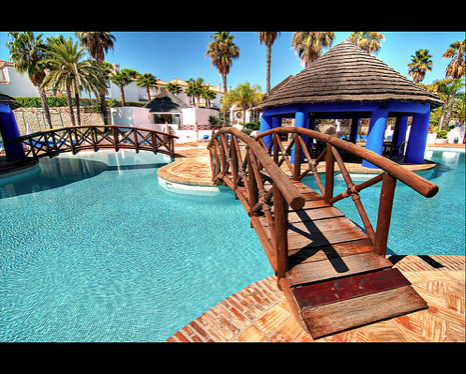 Why not go to this great location?

Summers in the Algarve can see the temperatures soaring high to 30ºC and staying there until autumn arrives. The days are long and sunny, with at least 10-12 hours of unbroken sunshine each day. It's not unknown for the temperature to rocket to 40ºC in the sunshine, and 30ºC in the shade.

However, although the temperatures in the Algarve are high, especially during July and August, the heat can be deceiving and it's easy to get sunburnt. This is because of the gentle sea breeze which often can be found. This coupled with the lack of humidity can make it appear much cooler than it actually is, especially nearer the coast in places such as Quinta do Lago.

At night, the temperatures will remain reasonably high; expect warm evenings around 23ºC but certainly no lower than 18ºC.

The golf-loving resort of Quinta do Lago lies in the very southernmost part of the Algarve, bordering the Ria Formosa nature reserve.

The lagoon lying in Rio Formosa is tidal and a wooden bridge crosses from the resort to the white sands of the beach.

The ocean waters in the Algarve are amongst the calmest in the Atlantic, being influenced by not just Europe but also the Mediterranean and North Africa. The lack of industry in the Algarve also results in a lack of pollution meaning the waters are not just warm (sometimes reaching 26ºC), but also clean and clear. The beach at Quinta do Lago holds the Blue Flag award for clean water.

Being so close to the coast, Quinta do Lago has a slightly more marked difference in the seasons than inland Portugal. The winters by the coast are more likely to see rainfall but despite this, the resort will still be far less affected by wet weather compared to other top locations in Europe. The average rainfall for Quinta do Lago is just two inches per year.

The most falls in the mountainous regions which very occasionally experience snow as well but if you want to see this, you will have to be quick as it very rapidly melts!