Quinta do Lago – A Guide to the South

Although Quinta do Lago offers a number of different courses for players to enjoy, it is without question the South Course which is the star of the show.

Having hosted the prestigious Portuguese Open tournament on eight occasions, the quality of the greens and fairways of the South Course is unquestionable.

Created by US golfing architect William F. Mitchell in 1974, the South Course is a favourite amongst golfing professionals and remains one of the most prestigious circuits on the European Tour.

We take a closer look at the South Course and exactly what it is that makes it so special.

With a par of 72, the South Course matches the North Course but as a general rule, is better suited to the more experienced players.

Being laid out to Championship standard, the course is extremely demanding and favours those who can drive the ball far. However, it requires precision too; power without accuracy will see the ball end up in one of the hazards on the course or running off into the rough. But for those who manage to drive true and straight, the course is rewarding.

The South Course is in many ways the flagship circuit of Quinta do Lago and this shows in every aspect of the circuit. From the spectacular views of the lagoon and the luxury villas (look out for these on the 16th green in particular) to the tip-top condition of the grass even in the rough, there's no tiny detail which hasn't been attended to.

The front nine holes wrap around a circuit of parkland whilst the back nine circle a lake, providing a great variety of views around the course.

With umbrella pine trees sprinkled liberally around the course, wild flowers and heather, the surroundings are spectacular. With the second half of the course looping the lake so tightly, and dropping down to the edge of the Ria Formosa nature reserve, you could even get to see some of the area's wildlife without leaving the course.

A breakdown of the holes

Just how difficult each hole will be depends on the flag position, but it's possible to get an idea of the general demands of the course. The holes are broken down as follows:

The par for the course is 72 and the shots are equally split, with 36 going out and 36 coming back.

Golf is a great sport to play.

The 2nd hole with a par of 5 is the first real opportunity for a birdie but there's still plenty of pitfalls which need to be avoided. The initial drive will roll from right to left on landing but be careful not to veer too far to the right if you want to avoid ending up in the bunkers. The green has bunkers to the left and a trap on the right side, so approaching it from the left after the second shot is the safest option.

The 3rd hole looks fairly generous at first sight but don't be fooled by the inviting-looking fairway. Although wide in appearance, there's a right to left slope which is accompanied by pine tress on the right which frequently block the second shot from this par 4. Try too hard to avoid the pines and you could end up rolling your ball into the lake which runs alongside the left hand part of the fairway. The green is no less forgiving and a cautious shot will see your ball running helplessly into the lake. On the right hand side of the green is another trap designed to catch those determined to avoid the water.

The back nine holes are often described as being more gentle than the front nine, and between the 14th and 17th holes you will be treated to views over the Ria Formosa as you are brought down to the edge of the reserve.

The 14th hole is one which can test even the most experienced of golfers when there's a stiff breeze. Elevated 25 metres above the fairway, any tee shot which is sliced or hooked will be punished severely on this par 4. Aim for the centre of the fairway and you'll be able to reach the green comfortably with a mid-iron, avoiding the traps on both the left and the right.

The penultimate hole is another testing par 5, but with stunning views of the lake from all sides from the tee. The fairway is generous but aim left rather than right and once you reach the green beware of the nasty contours which can easily catch even the most experienced player out.

It is possible to hire equipment at the South Course, with hand and electric trolleys available plus a golf buggy if desirable. However, simply walking around this magnificent course is a treat in itself and there's a wonderful feeling of seclusion and isolation because of the way the holes were designed. You may therefore prefer to simply walk between holes to admire the breath-taking views and the beautiful landscaping of one of the best courses in the world. 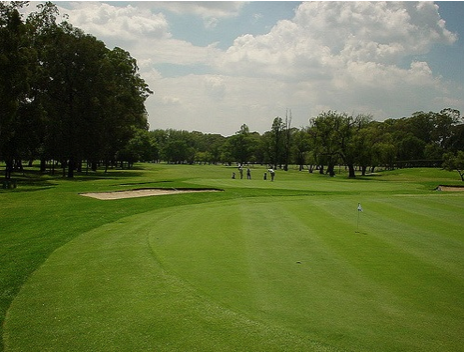 There are many great facilities on offer.

There's a putting green and a driving range as well as a restaurant and bar. Private tuition is available with groups of up to 4 people permitted per professional. Soft spikes and a handicap certificate is required to play on South Course.